I felt a twinge that might not have been indigestion. There was a chance I was believing my own fairytale.

Evidently Lovestruck is flash fiction (about 300 words) which originated from a word-list challenge from a couple of years back – you know how I love them! I think it was a list of words that President Trump had (or was rumoured to have?) banned so it’s an eclectic mix and took me in unusual directions. Given that I’ve spent the bulk of the last 24 years on one university campus or another, it’s no surprise that it’s set at a university, and as my background’s in physics the tongue-in-cheek jibes at love across the STEM/Arts divide are probably not that surprising either. It came out at the beginning of June, which people keep telling me is Pride Month. When I was an undergraduate and first starting (unsuccessfully) to submit stories to competitions in the late nineties, I think having a gay couple at the heart of a story like this would have been seen as political, potentially controversial – what point are you trying to make by having them be the same sex? As it happens my first submitted story was about a same-sex couple (female, since you ask), but then I was trying to make a point. Whereas when I wrote this quirky little campus romance, the two characters that popped into my head both happened to be male and I liked the way they went together. It never crossed my mind that this was anything out of the ordinary (which indeed it isn’t now, thankfully), until I thought back on how far we’d come.

The other story that came out this week is Twelve Weeks’ Rest, which was written during (and is about) lockdown, and is much longer (nearly 2000 words). It’s about trying to look after your health when the management see you as a human resource, not a person. It’s about hidden key-workers, the ones in warehouses that people forget are at the other end of their online order when they’re shopping for essentials. It’s also about sisters looking out for each other. It’s dedicated to (and sadly inspired by) Sister Number One. I was angry when I wrote it and I think that comes through, but I hope a bit of humour sneaks through too.

She says it like she’s disappointed in me, which she probably is. A loyal employee would tell the government to stick its shielding programme and carry on working.

You can read Evidently Lovestruck for free online at Truffle magazine. For Twelve Weeks’ Rest you can either read it on the website (be aware that it’s 4 pages long so you have to keep going back to the top to move on) or download both volumes of Issue 1 at the main Untitled:Voices page – they are free, but Untitled are asking for donations to the Stephen Lawrence Trust.

Yet another day in the greetings card manufacturer list of approved spending times has gone by, but it seemed like a reasonable excuse to muse on literary love. That could mean a favourite relationship between characters, a character you wish was real so you could spend the rest of your life (or a romantic evening) with them, or even your love affair with a particular book. 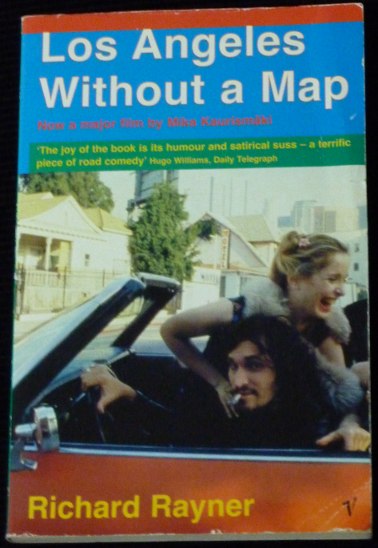 Los Angeles Without a Map, by Richard Rayner, is quite a good book about mad impulsive infatuation (though the film may be better: it stars David Tennant and is partly filmed in Bradford, which is how come I went to see it at the pictures with Big Brother). Boy meets girl, girl goes home to Hollywood, boy follows bizarre whim and flies there to start a new life (girl not necessarily that impressed). It’s an amusing account of an Englishman out of place in a world where everyone wants to be in movies and nothing is quite as it seems.

Dare I mention Aragorn and Arwen, or is that too predictable? How about Magrat and the Fool, in the Discworld? I clearly don’t read the right sort of books for this, I can’t think of any characters suited to romantic evenings but I will give a special mention to Forral, from Maggie Furey’s Artefacts of Power quartet, who in my head was always more or less OneMonkey.

Anyone out there care to chip in?