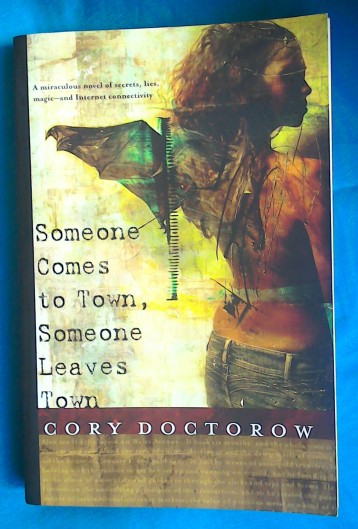 This is an odd book, there’s no denying it, but it’s a good one if you take it on its own terms. At its simplest it’s an urban fantasy set in Toronto in the early 2000s. Middle-aged former shopkeeper Alan refurbishes a house in the bohemian area of Kensington Market, befriends his student/drop-out neighbours (one of whom has wings) and gets involved in a community project to deliver free local wi-fi. Much of the book is taken up with the day to day goings on around all that. However, (and here’s where you have to like a particular sort of oddness) Alan’s father is a mountain, his mother is a washing-machine, and three of his six brothers are nested like Russian dolls and can’t exist without each other. The innermost nested brother goes missing, the other two turn to Alan for help and it looks like their brother Davey, who they all killed years ago, has returned for revenge.

Full of interesting characters and with some affecting flashbacks to Alan’s childhood, I thought there was a good undercurrent of living with secrets and fitting in, getting on, being normal – whatever that means. It gets pretty dark at times but it has its lighter moments and some beautiful imagery. I have only two minor quibbles with the novel: names and chronology. Though Alan is mainly referred to as Alan, he is for no particular reason I could fathom also referred to by any other name beginning with A, similarly with his brothers B, C, D, E, F, G so that sometimes they change name within a paragraph, and Andrew and Drew refer to two different people (Alan and Davey). Mainly the book is in the here and now in Toronto, or Alan’s childhood further north, but occasionally there’s a flashback to earlier in Toronto that isn’t clearly a flashback (confused me anyway), and it’s not always clear how much time has passed between events (or how old Alan is, but that may be deliberate).

If you enjoyed, or think you might enjoy the superbly odd graphic novel The Motherless Oven by Rob Davis you’ll probably love this Cory Doctorow novel. And, because he like me is into the Creative Commons stuff and sharing art, you can even download it as an e-book for free so what have you got to lose?