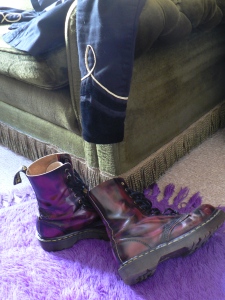 Resurrection Joe was a short (about 40,000 words) novel I wrote in 2001 charting the lives and loves of a group of friends in the north of England (goth, glam, metaller, and even 1 or 2 of no specified clique), and in particular the romantic and sartorial reawakening of one Joe Peterson. Which at least gave me the chance to crib the title from a Cult song.

The first few chapters used to be available here, but I’ve decided to take them down.

10 years is a long time, and though I have a certain affection for (at least some of) the characters, my prose abilities have come a long way since then. Not that I’m saying it was particularly badly written – I honed my skills in natural dialogue during the writing of Resurrection Joe and I’m at least grateful to it for that. However, looking at it now, if it doesn’t quite make me cringe it at least makes me itch to rewrite it. But the world has moved on. I’ve moved on, and the sequel I wrote 20,000 words of will undoubtedly remain incomplete.

ResJoe (as I always ended up calling it) had its appreciative audience and at least 2 people were looking forward to the sequel (make that 3, including me – I never did quite decide the outcome of it) but it’s time to lay it to rest. Too many other things to write, too little time to work on them. Not to mention the butterfly mind that means I leave so many half-finished.

This site uses Akismet to reduce spam. Learn how your comment data is processed.